Social media and interactive communication on the Internet have spawned many acronyms and expressions to quickly and clearly indicate one's opinion, mood, state or nature of expression.
TBH or "To Be Honest" is one of the most commonly used acronyms on the Internet, online games, and Instagram. It means “to be honest“ or ”to be heard." To understand what this acronym means, you can rephrase it to:

TBH gained popularity in the early 2000s. It was used in short message correspondence. But the limited number of characters forced to shorten long phrases. That's how "To Be Honest" evolved into the short and concise TBH, which moved to Facebook and Tumblr platforms in 2010, and later became an integral part of Instagram users.


Where do Instagram use TBH and what does it mean?

"TBH, I use GetLikes to pump up my Instagram account, and I have great success" is a simple and accessible example of a comment with TBH. 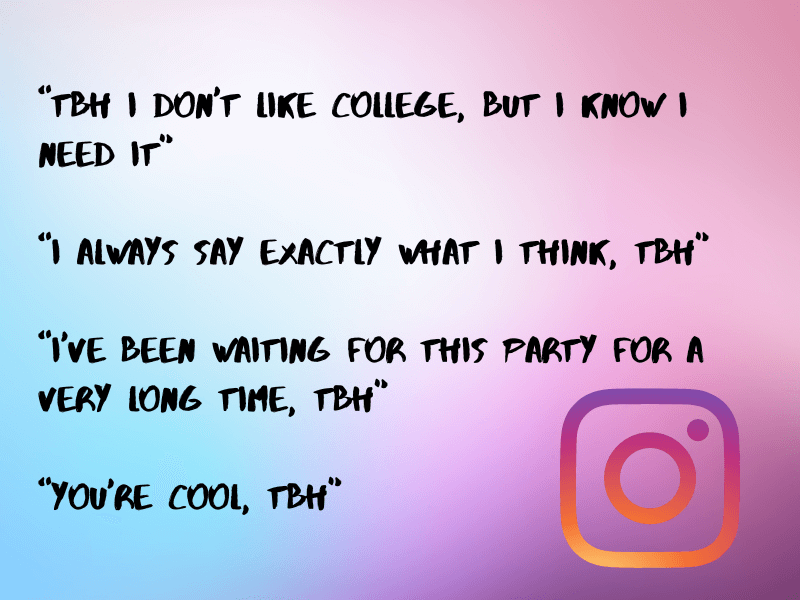 Young audiences easily and organically incorporate the TBH acronym into their sentences. And regardless of activity or interest, they can reinforce messages:

TBH is very often used at the end or beginning of a sentence. And apart from meaningful additions for their comments or posts, TBH on Instagram can be found as a greeting.

Apart from the content, TBH is a way of identifying yourself. When you use such acronyms, it means that you care about your young audience, you are part of it, you follow trends, and can be interesting to new young followers.

TBH builds personality and defines your target audience if you're a blogger and are working to boost your Instagram profile and add popularity.

TBH on Instagram is a prime example of how acronyms can evolve over time, taking on new forms and meanings. As well as infusing dry phrases with mood and adding stylish elements to your posts.

Your email address will not be published. Required fields are marked *